We were talking about the change in home t‑shirt of the national football team. So what’s new in it? In the history of Mexico football, they will wear black home kits instead of their traditional green color which they worn for nearly fifty years. Since the 1958 Football Cup in Sweden, Mexico has been using a green home shirt. But this time, Adidas replaces green color with black for the upcoming tournament.

From now, Mexico will feature in entirely black home kit. The new Adidas Mexico 2015 Home kit is black with a simple black crew neck collar. To create a modern look, there is a unique gray horizontal pattern used on the chest of shirt.

The Adidas logo, 3 stripes on the sleeves and a monochrome Mexican National Team seal are electric green. At the bottom of the shirt is a stripe design creating the Mexican flag.


The new Mexico 2015 Away kit comes in white, and has black, light green red details. The collar is in a polo style, which features a striking green line to create a modern look. 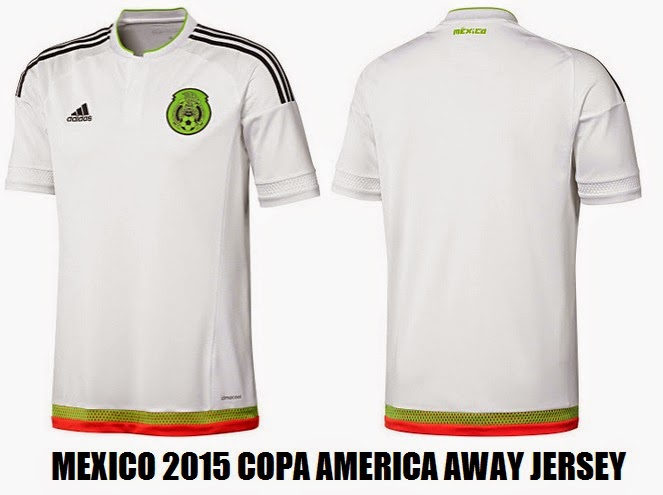 The Adidas logo and iconic 3 stripes on the sleeves on the front of the new Mexico 2015 Copa America Shirt are in black color. While on the bottom of the shirt, there has an attractive red and light green striped pattern, with red spots over the green stripe and a solid red stripe underneath. Adidas also unveiled Paraguay 2015 kits for Copa America.

The Mexico word is written on the back of the new 2015 Copa America Mexico Away Jersey. White socks and shorts, with black Adidas stripes on both complete the kits of Mexico for this South American football competition. That’s all about new uniform of this national team. Check out the all Copa America 2015 kits.