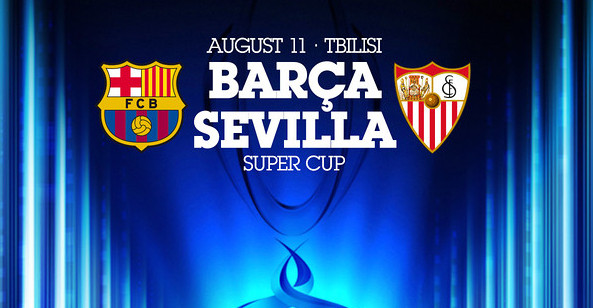 FC Barcelona and Sevilla once again about to play in the Europena Super Cup for the second time. In 2006, they are the respective winners of the Champions League and UEFA Cup (Europa League). Sevilla won that match with 3–0 against the Spanish giants. Since 2006, the two sides have met 25 times in which 16 games are won by Barcelona. while Sevilla managed to win four matches. So history is on Barca’s side and they are once again the favorites to win the title.

This will be ninth appearance of Barca in this competition which is bigger than any other European club. They are the second most time champions of Super cup which means one more win will make then the most times champions, equalizing AC Milan who won it five times. For the second time in a row, Sevilla will play for the title glory. The red and whites were defeated at the hands of Real Madrid last year. The Andalusians saw off Barcelona 3–0 in 2006 but 12 months later succumbed 3–1 to Milan in an occasion overshadowed by the death Sevilla player Antonio Puerta three days earlier. Barcelona recorded their UEFA Super Cup appearances to nine and victory would allow them to equal AC Milan, the five time winners. Barcelona have won just time before that competition. Sevilla are appearing for the successive second season. In last  year, they went down 2–0 to Real Madrid CF. Predictions: Footballwood predicts 2–0 win for Barcelona

Tomorrow, the match Turkey-Italy starts the next European Football Championship. Initially, this tournament was supposed …